This repository contains the integral Let’s Go! dataset, obtained from use of the Let’s Go dialog system and its derivatives. The Let’s Go data and system have been used in over 22 theses and over 250 non-CMU publications. Let’s Go was funded by the National Science Foundation. Arguably the largest publicly available real user dataset at the time of its release, Let’s Go went live to real users on March 5, 2005. The Let’s Go system was connected to the public information phone number for the Port Authority of Allegheny County. During daytime, human operators manned this number, but after 7pm and until 6am the next day, and for longer periods on the weekends, all calls were routed to Let’s Go. The route schedule changed three to four times a year with some routes being eliminated over time. Let’s Go began with coverage of only the East End neighborhoods of Pittsburgh, but in later years it covered all of the Port Authority’s routes. The logfile of all changes made to the system can be found in ./changelog/overall_lg_map.current.xls.

There are a total of 171,128 dialogs in this Let’s Go dataset. A total of 104,663 of these are at least three turns long. This is important since it is the minimum length needed in order for the system to get enough information for a backend lookup (and thus possibly have a successful dialog). But the user could have repeated information or changed a request and so not filled all of the slots in three turns. A total of 93,690 dialogs in this dataset had a backend lookup. This is the measure (at least three turns and a backend lookup) that the Let’s Go team used for the estimated success rate. We note that although it means that the system found information and gave it to the user, this is only an estimation of success since the system could have looked up and given the wrong information (due to ASR errors, for example), but it was at the time one indication that allowed the ream to compare different versions of the system. For example, during the switch from the system-directed “where are you leaving from” to the more general “How can I help you?”, the estimated success rate was used at first to determine whether the system could deal with the general question.

Please note the license for use of this data License. Please agree to this license before downloading the data.

The instructions for downloading the dataset are straightforward. Please create a GitHub issue if you encounter a problem and our team will assist you as soon as possible. To get started, go to the introduction.

Let’s Go! is a spoken dialog system that was used by the general public. Let’s Go! gave bus information scheduling for the Allegheny County Port Authority Transit bus system via a telephone-based interface to access bus schedules and route information.

The project page is at http://www.speech.cs.cmu.edu/letsgo/

NEWS: Let’s Go has been integrated with the DialPort project. You can talk to it by going here and asking for bus schedules.

There are eight components in this dataset that are available for download:

The dataset is divided by months. Each month of data has the following directory structure (an example for July, 2014):

The graph below shows the amount of dialogs per month in the dataset. 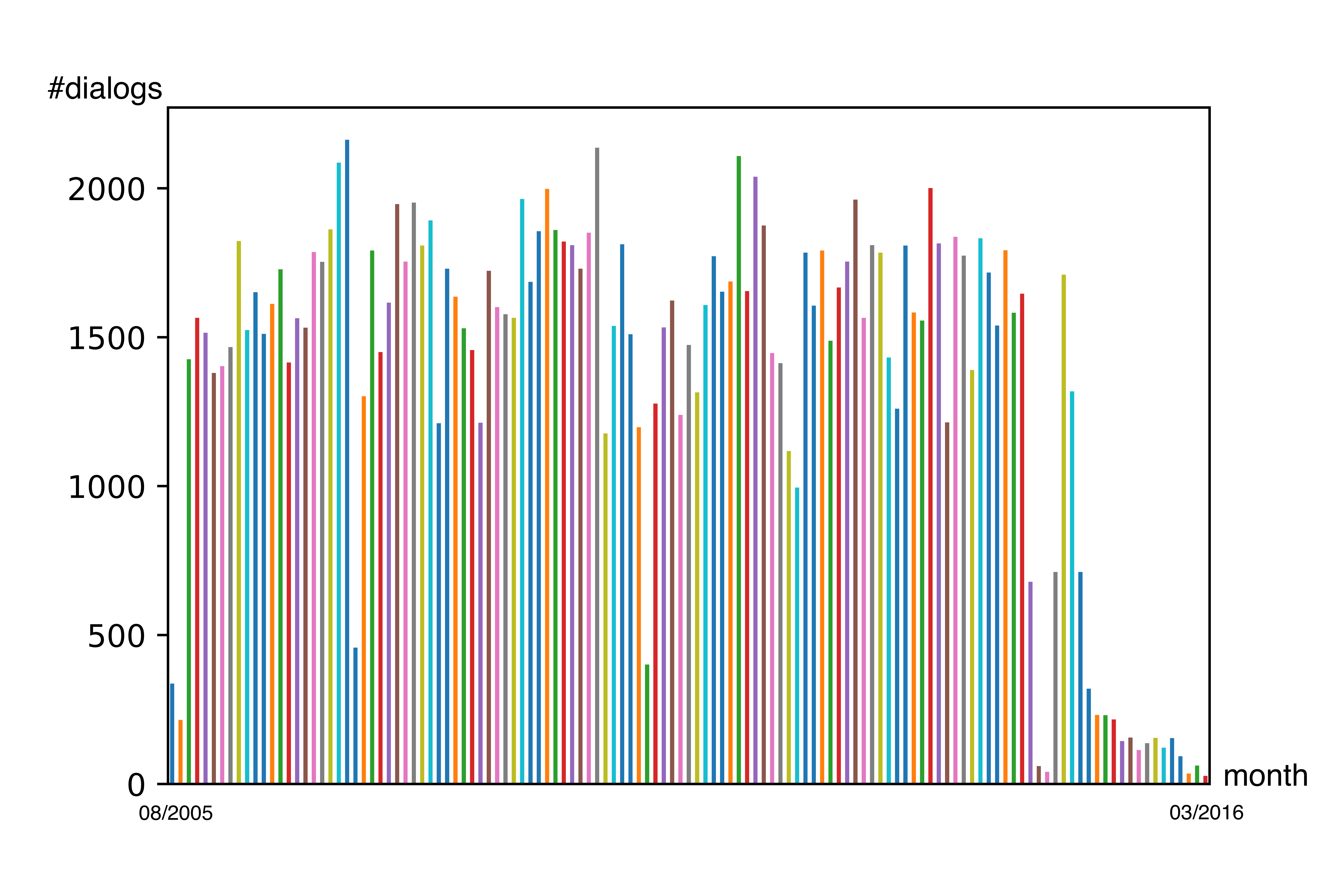 There are a few months where there was significantly less data:

The Spoken Dialog Challenge took place in 2010. It compared how different spoken dialog systems perform on the same task. Bus Information was the task. Four teams provided systems that were first tested in controlled conditions with speech researchers as users. The three most stable systems were then deployed to the Let’s Go real callers.

SDC participants were to provide one or more of three things: a system; a simulated user, and/or an evaluation metric. The bus task was chosen for the first SDC because it already had a large number of real callers (Black et al. 2010 and Black et al. 2011).

To download The Spoken Dialog Challenge data, please use the script get_sdc_data.sh.

The script will create one directory named letsgo_sdc in your current path and download the Spoken Dialog Challenge data into the new directory. The new directory will also contain the readme description of the dataset and the license.

The Dialog State Tracking Challenge (DSTC) is an ongoing series of research community challenge tasks. Each DSTC released dialog data labeled with dialog state information, such as the user’s restaurant search query given all of the dialog history up to the current turn. The challenge is to create a “tracker” that can predict the next dialog state. In each challenge, trackers have been evaluated using held-out dialog data. (Williams et al. 2013)

DSTC1 used the Let’s Go Bus Information system human-computer dialogs. This dataset has been used for a number of recent publications.

The log file can be found in the directory ./changelog/overall_lg_map.current.xls.

Crowdsourced Annotations from one year of Let’s Go data

The log file can be found in the directory ./annotations/letsgo_transcript_2008_2009_v4.csv.

The Let’s Go Daily Report was emailed to members of the Let’s Go team daily (there is also a weekly summary). The original idea was that the Daily Report would make the team aware of any system malfunctions during the previous evening that the system was not able to directly warn everyone about by email. It covers 2006 – 2016 and gives statistics on the number of dialogs that day, average number of turns per dialog, estimated success rate (via backend lookup), etc. (the links in each file).

These emails reside in the project repository under ./emails directory.

You can obtain the integral Let’s Go dataset using the shell script we provide in the repository. e.g. to get Let’s Go transactions for data recorded from July 2014 through August 2014, simply do:

The script will create one directory named letsgo_dataset in your current path and download all the data specified within that time range into the new directory. To uncompress the data, you need to run a simple tar command, e.g. for 201407:

If you have more questions about the Let’s Go systems and dataset. Please contact us:

Gabriel Parent and Maxine Eskenazi. Toward better crowdsourced transcription: Transcription of a year of the let’s go bus information system data in Proc. of SLT, 2010.

If you download and use the Let’s Go data, you agree that you will cite it in all publications resulting from its use.

This work was supported by the US National Science Foundation under grants number 0208835 and 0855058, “LET’S GO: Improved Speech Interfaces For The General Public” and “CI-ADDO-NEW: Dialog Research Center (DialRC)”. Any opinions, findings, and conclusions or recommendations expressed in this material are those of the authors and do not necessarily reflect the views of the National Science Foundation.